Every time I sit down to write a new blog, I’m shocked by how quickly our travels are going. What a rollercoaster of a first month we’ve had in New Zealand!

We arrived with precisely zero plans, other than a few pages of my notebook crammed with recommendations for both islands. Taylor’s auntie and uncle live in Auckland, and picked us up from the airport to whisk us off for a delicious first meal in a city suburb on the first night.

The next morning, feeling refreshed after a long sleep, it was time to get planning. We’d budgeted so well in Australia that we could just about scrape together the Kiwi-cash needed to hire another campervan, for half the price of what we paid for our lovely first one. Once we’d gingerly parted with yet another chunk of our savings, we had a few days till the rental started, so we headed into Auckland to explore.

During our week there, we sampled the amazing Asian food that had been recommended to me before we arrived, wandered along the harbour and boarded a ferry to complete the 10k hike of the volcano on Rangitoto Island, which was a bit tiring for both of us after sitting on beaches in Aus, but worth it for the views of the city. We also caught up on Netflix and mapped out the route we would take during the next two months. 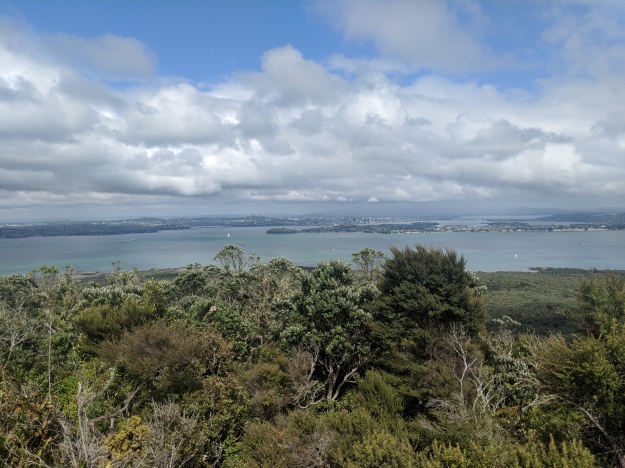 Monday came around quick and it was time to get moving. We met our rental guy at the airport who drove us to an alarmingly rural property where we met our new van, ‘Vance’, and tried not to be phased by the rusting, creaky old manual beast, with nearly 400k kilometres on the clock!

We soon got used to driving it and were happy to have our independence back and get on the road. Our first stop was Coromandel, a beautiful piece of coastline with breathtaking roads that led us there. The whole landscape looks like Mordor, and I quickly understood why people rave about this country’s scenery.

Another thing NZ is famous for is the Shire, the movie set for the Lord of the Rings and The Hobbit. Both big fans, we couldn’t wait to see it, so splashed out on tickets for a day trip. The set is built on a sheep and cow farm and was chosen by Peter Jackson due to its lush green hills which resemble Tolkien’s description of the Shire in the books.

I’m a sucker for small details so I adored the intricaties of the set. Each Hobbit hole had miniature shelves with trinkets and ornaments and perfectly kept gardens, and just felt so believable. The tree above Bagend was artificial and 200,000 leaves had been hand-sewn to the steel branches, and then hand-painted a slightly different shade when the director decided he wasn’t keen on the colour! Now that’s perfectionism.

We finished the tour with a drink at the Green Dragon, which was my favourite part of the set. The ornate detail inside was amazing and there was so much to take in as we sipped our apple ciders from our Hobbit goblets! 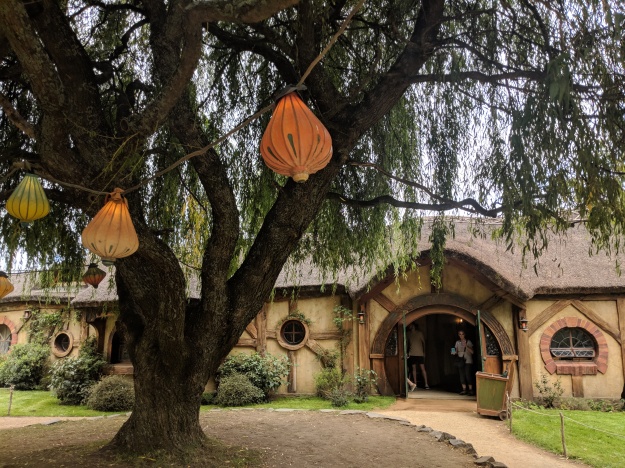 That night, after weaving our way in and out of sleepy towns, we landed in Rotorua. Safe to say the most memorable part is the stench of sulphur leaking from the geothermal spa pools there. Waking up to the smell of rotten eggs is not a highlight!

Taupo was the next pin on the map, and I was so pleased to arrive at the stunning lake. It’s a cool little town, really well-equipped, and we found another freedom camp (essentially a car park you can camp in for free) at the water’s edge, where we stayed for two nights watching skydivers floating into the nearby airport.

We also saw Huka Falls while there, a waterfall that flows at 200,000 litres per second, and had a dip in a 42° geothermal pool (the non-smelly kind). 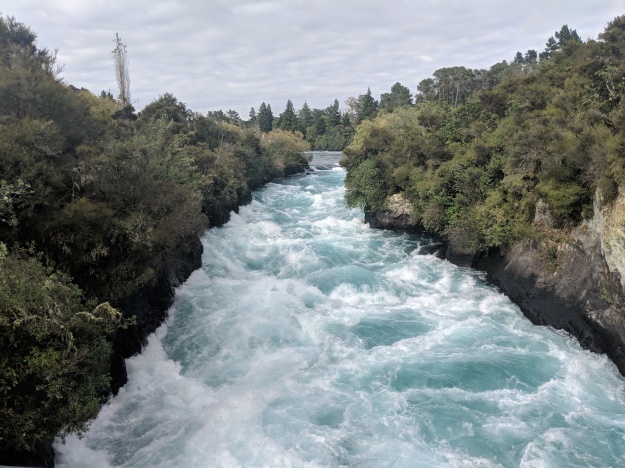 Next we decided to hike a small 6k section of the Tongariro crossing, encountering people who were coming to the end of a seven-hour, 20k hike right from the other side! We were happy with our much shorter walk, and enjoyed the lovely views from one of the first peaks.

We stayed at some beautiful little camps on the way down south, including one at Lake Wairapapa when Taylor woke me up at pitch-black 5am to admire the stars. The milky way was glowing and the light from Venus shimmered on the lake – unbelievable.

A few days in Wellington preceded our ferry trip. The marina car park we stayed in was pretty, as was Wellington itself, which has a swanky quay full of nice restaurants and bars and the Te Papa museum which gives lots of info on Maori history. 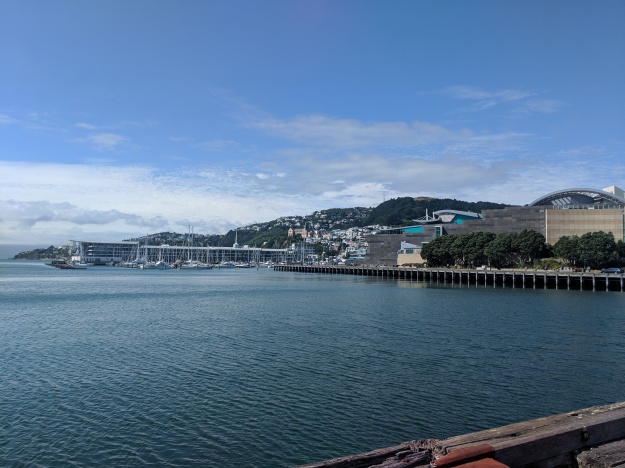 We were so excited to get down to the South that we didn’t mind the 6am start for the early crossing, and had a lovely and scenic journey across the Cook Strait. It’s labelled the most unpredictable and dangerous channel of water in the world, but the trip thankfully didn’t live up to its reputation. 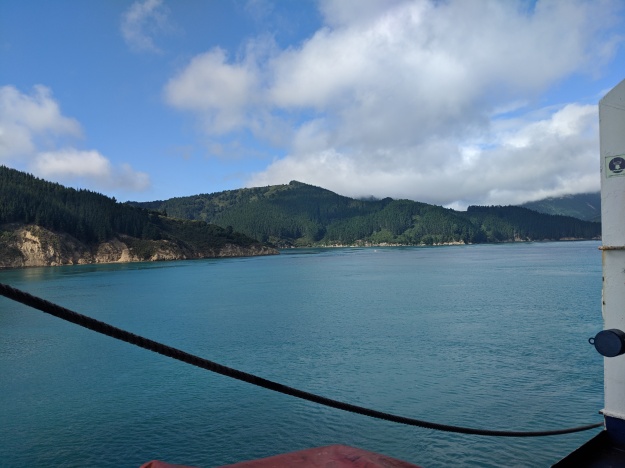 We treated ourselves to a night in a paid campsite, then headed straight to the Abel Tasman National Park to see what all the fuss is about. A little way up the coastal track, we found a stunning beach and lookout, and booked ourselves a full-day kayak for exploring the rest. 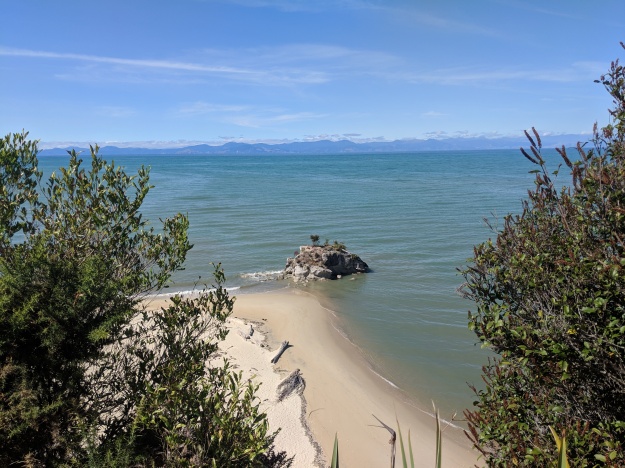 Gruelling as five hours of rowing felt, it was so worth it for the gorgeous scenery and pit stops at golden beaches that seemed almost untouched. We also rowed to Adele Island to seal-watch, and saw tonnes of the ‘dogs of the ocean’ frolicking in the water and sunbathing on rocks. It was definitely a highlight of the entire trip for both of us.

We finished our trip in Abel Tasman with a long drive up north, where we took a quick walk to a lookout that offered great views of both coasts. I was really starting to fully appreciate how epic this place really is!

Next we headed back down, with a mission to get to the next major stop on our list – the Fox Glacier. After a few nights, and a visit to the Devil’s Punchbowl waterfall, we made it through a torrential downpour and arrived in the tiny town of Franz Josef. It’s a sweet place, but only has one shop, an information centre, lots of camps and not really much other than that. 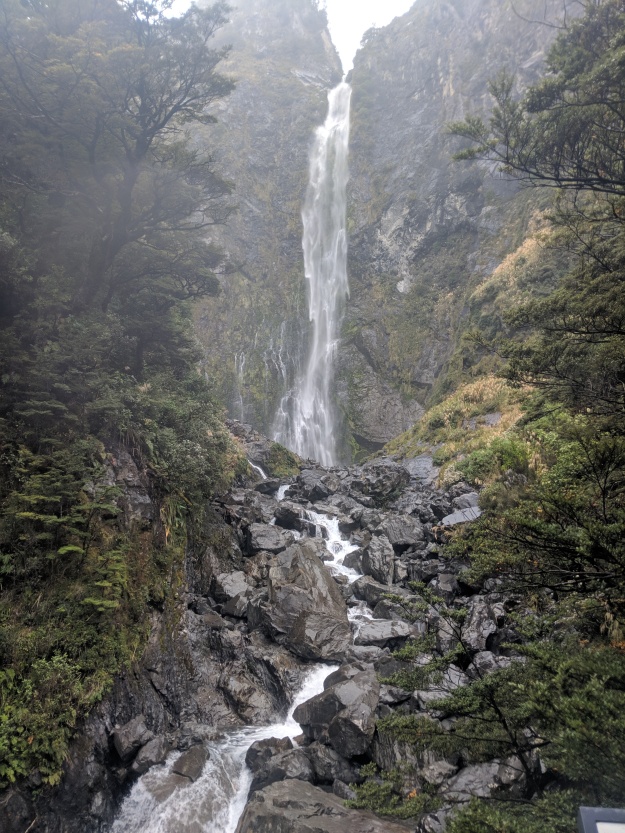 Overnight the rain increased massively. Ready to venture to the Glacier for a walk the next day, we were told that the road (there’s only one) going both north and south was completely closed. Lake Waiho Bridge, which forms a big chunk of the road down south, got wrenched away downstream in the flooding and had stranded us and hundreds of other tourists in Franz Josef.

There was no other option but to sit in a soggy camp all day with major cabin fever and dying phone batteries. It got so desperate that we even played hangman on the condensation on the windows!

The next day, frustrated with soaking clothes that wouldn’t dry and worried about being trapped in the town for another night, we waited for news of the road opening. At midday we got the go ahead, so sped off back to Greymouth, where we’d camped a few days before, and remapped our route.

We needed to cut across the country, and after an hour’s wait due to (another) flooded bridge on that road, we were on our way. The sights were absolutely unreal for the whole route, making the further delay totally worthwhile! 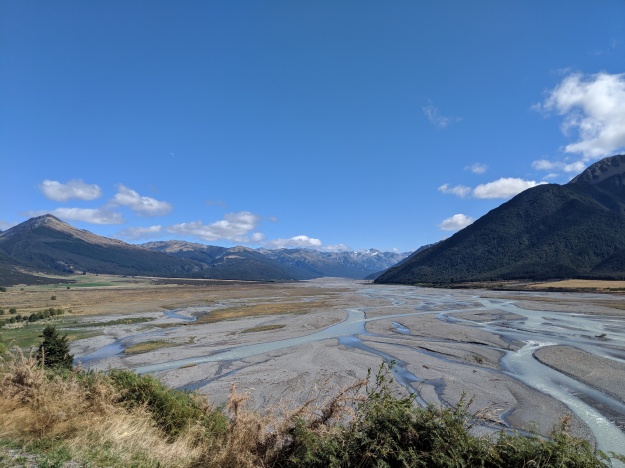 Following a brief kip in Winchester, we reached Lake Tekapo and immediately decided it was the most beautiful place we’d seen yet. We drove up to the Canterbury University Observatory for a higher look across the lake and spent the day wandering around the quaint town.

That evening, I was desperate to stargaze as I’d heard it was the best place for it in New Zealand, so we snuck to a non-camping spot overlooking the lake and met a lovely German couple who had rented the patch of land from a farmer for that evening. We saw shooting stars and satellites glinting in the black sky, with the milky way streaking across it. It was so beautiful that we lost track of time and had a rushed sleep before darting off at 6am to avoid the land owner! 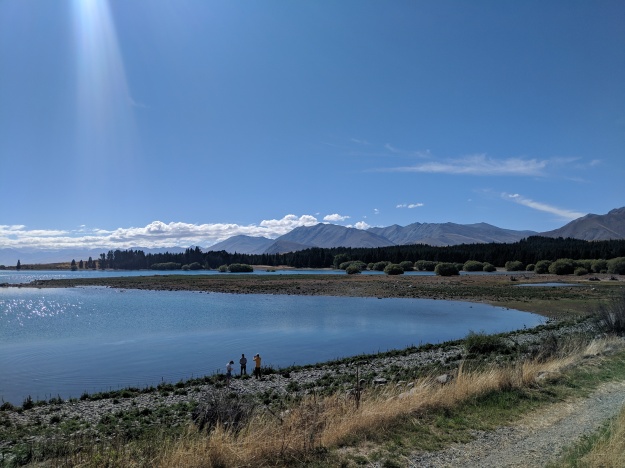 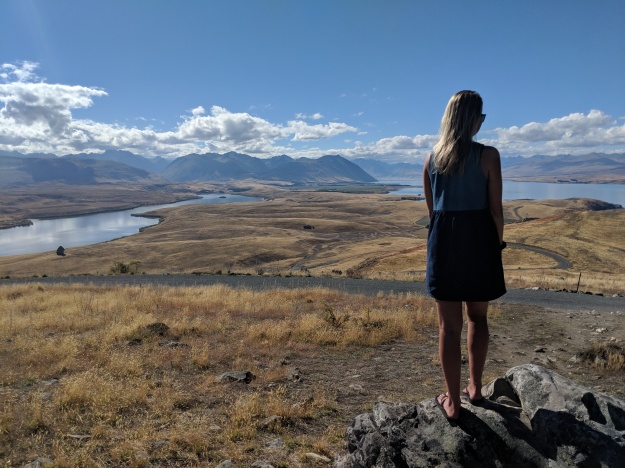 After a very early start, we treated ourselves to a day at Tekapo Springs in the hot pools to relax and enjoy a shower. We hadn’t had sunbathing weather for a while, so it was nice to wind down in a sunlounger with the view of the gorgeous blue lake and mountain ranges ahead of us. 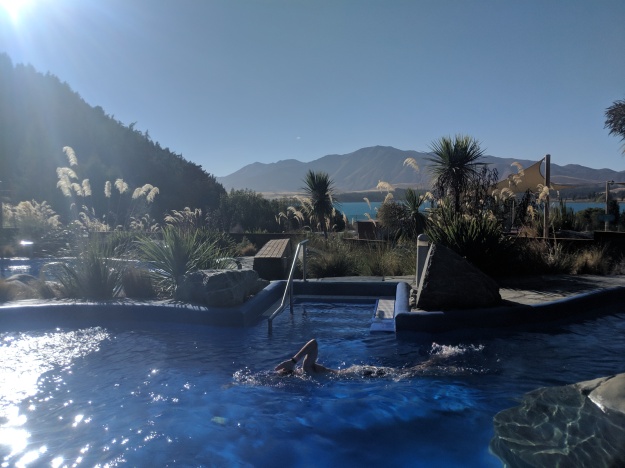 Over the next few days, we indulged in some of the most incredible natural wonders this country has on offer. We enjoyed two walks in the Mount Cook area, our favourite being to the Tasman Glacier where we saw icebergs floating at the foot of the Southern Alps.

Then we arrived in Wanaka, a little town which we loved, and which would be our gateway to the Southern Highway 6 towards Haast, which was a road we’d been told had views we couldn’t miss. Travelling up and back down again, we saw landscapes across Lake Wanaka and Wanea as well as a beautiful Fantail Falls which has crystal clear water.

Spending a few days soaking up the scenery has been a perfect way to conclude three months of travelling. It has been the best experience of my life so far, and I am appreciating every second of the last month we have here in amazing New Zealand. I’ll be sad to say goodbye to this part of our world! It’s a treasure.